Last Monday (August 12th) I took a small SPY short position based on a “failed breakout” scenario, above $131 (I actually used SDS–the inverse ETF). It’s now trading at $126.69. Below is what I wrote to my trade report members. It explains not only the setup, but the thought process and trade management strategy that went into the trade:

Price action in the SPY crossed a major hurdle by closing above the 50 day moving average today. The key now is to see if this level will hold. I still expect a pullback, and actually went short today at the close. Very small position. There is absolutely no setup that I trade that told me to go short today. I can’t remember the last time I took a short position when a stock crossed above the 50 day moving average. This trade was based on a hunch and some “risk strategy”.. I have a feeling that the market will not be able to sustain this upmove without a pullback.

Many of you are probably thinking this is a dumb trade. I won’t argue with you, but let me explain my reasoning using poker.

This weekend I was at a table with 5 other players. All five players had called a $12 bet, and I was the “big blind”. If you don’t play poker, don’t worry about what that means. All you need to know is I needed to put $6 into a pot that was had already built up to $60. Thus, my pot odds were 10:1.

I did not have a great hand. I was holding pocket 9s (two nines). Considering everybody was playing, at least a few players were likely holding a card higher than 9, and the upcoming community cards would likely have at least one card higher than nine, there was a good chance I would lose the hand. However, there was an eight percent chance that one of the community cards would be a 9. That would give me a set, which is a strong hand that I would likely win. Chances are also good that if a 9 did come on the flop, I could sucker at least one or two players with a higher two pair into betting more money that they would inevitably lose.

Let’s say whenever a 9 comes I can figure on winning an average pot of $120. Using the 8 percent chance, I will win $960 every 8 out of 100 times this happens. I will lose a total of $552 total in the other 92 hands for a total gain of $408 over 100 hands with pocket 9s. I know some of the poker buffs will argue with my $120 figure–I’m going by my own experience and ability to read opponents and disguise my own hand.

An aside for the poker fans: What actually happened was a miracle . . .a 9 did come down on the flop, and so did an king (and no flush or straight draws). The guy with the king went all in, $230 and I called. I ended up winning a $300+ pot (excluding my own contributions), based off an initial risk of $6 that allowed me to see the flop.

Now can you see where I’m going with the SPY short trade? There is a good chance I will lose with the trade. I know this going in. Based on my stop placement and position size (200 shares) I am risking very little just to see what happens. I have placed my stop around $132 (I am actually using SDS to short, so $132 and 200 shares are is not exact figures).

See the logic? There is a method to my madness. I’ll take looking bad for a trade or two (or 8), as long as in the long run it makes me money.

There were a few days that I thought about getting out of the trade (when SPY remounted the 50 day ma), but decided to stick with my original analysis and stop. Spy has now convincingly broke down below the short term trendline and 50 day ma. 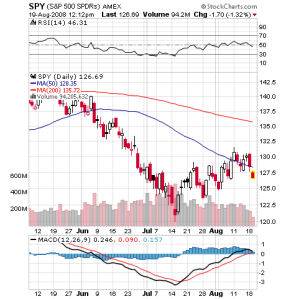 This might mark another decent entry point, as I would not be surprised to see more downside near term. Here is what I wrote about SPY in last night’s trade report:

The early “failed breakout” short play in SPY that I took on last week is still in play. Price closed just below the 50 day ma, but not enough to get really excited. If SPY closes tomorrow below the trendline in the chart below, I expect we’ll see lower prices.

If not already in the SPY short trade, I still feel there are only two places to enter short. Either on a break below the trendline and 50 day ma, or a rise to the 200 day ma (see yesterday’s report)

Finally, here is the SPY discussion from Monday’s report, which setup the short scenario in more detail:

I noted early last week that the SPY presented a low risk short play. Remember that low risk does not mean high probability. Risk is only a measure of what you could lose versus what you can gain. I also laid out how I take on many low risk trades, lose out on some with small losses, but will have a few big gains that more than make up for the losses.

While SPY the low risk short has not officially turned into a loss yet, it has mounted the 50 day and Friday held up above that support level. The stop is above the recent high of $132, so the possibility of the failed breakout trade working out still exists, but there is not doubt the bottoming pattern is still in play. While I will stay with this trade until the stop is hit, I would not recommend initiating another SPY short just yet.

However, I am not likely to go long either. Volume on this upswinging bottom play is not the type that propels price dynamically higher. This could be a result of options week, but still, I don’t like entering longs if volume does not confirm price.

If you are looking at an opportune time to short SPY again, there are two low risk entries.

1) If price again breaks down below the 50 day ma. The low volume makes this a decent possibility.

2) On a low volume rise to the 200 day ma, in the 135-137 range. This presents a great short on two different time frames. We already know the daily like the back of our hands, so let’s flip down to the weekly chart.

Weekly:
The first thing that jumps out is the head and shoulders top formation. During the top formation, RSI has down trended and volume has shown a great amount of distribution (selling). Now, price is pulling back up towards the neckline of the head and shoulders formation, which should act as support. This is a good, low risk area to place a short trade. Add to that that this level is also right around where the downtrending 50 week ma is hoverning (138), and is also the same area where the daily 200 day ma is located (136)–well, talk about a great short setup.

It will take time and patience for this trade to setup, but keep on the lookout. In the meantime, watch for a breakdown of the daily 50 ma, and focus on trading setups.

No new sectors that we have not already discussed jumped out at me, so I’m going to go straight to the watchlist. Lots of stocks setting up. This week we have over 60 that we will focus on.

Whew . . .it’s been an exciting trade with many ups and downs. This is a good example of how important it is to stick with your trade until your stop or target is hit.

One thought on “SPY Trade Analysis”